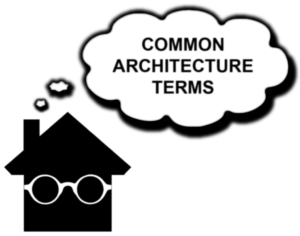 “When we’re done with CD’s, we’ll send them to a few GC’s and the AHJ, K?” -Say what?!! Every profession has its own terminology, but you don’t have to be an RA to understand the architecture lingo! Following are some of the most common terms in architecture, so you aren’t left thinking, “WTH?!!”